Busch Electric was founded in 1974 by Raymond C. Busch in Central California and moved to the Bay Area in the 1980’s to meet the demands of the rising custom home market.  The company experienced great growth and Busch Electric was incorporated in 1999 under the ownership of Ray Busch and Chris Rodgers.  Chris had been employed by Busch Electric since 1992.  Since Ray’s retirement in 2004, Chris now has full ownership and serves as President. 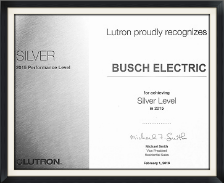